The salaries of the top 5 highest paid NBA players all have 2 commas and a whole lot of  zeros. We all know that NBA players earn some serious bank. What we don't know are the specifics. Your Google search for the  “Highest Salaries of the NBA” might show you how much these players signed contracts for, but those numbers probably don't reflect how much money they actually take home.

The published and highly publicized salaries of the top NBA players do not account for agency fees, federal, state and city taxes, as well as other various deductions.

So, how much do these NBA stars actually take home? We found a really interesting article from ESPN that shows the take-home pay of the highest-paid NBA players after all the deductions come out. You can find that article here. But being the (sometimes nerdy) payroll people that we are, we of course wanted to dive a little deeper into it...

You’ll notice a large portion taken out of a player's gross salary goes towards deductions. These deductions include Escrow, Federal Taxes, City/State Taxes, Agent fees, and maximum 401k contributions. The largest differences we see between the salaries of the players we analyzed are the state and city taxes. Steph Curry has the highest state/city taxes, with 11.8% being deducted from his gross income. Whereas, Millsap has the lowest state/city taxes, with 4.2% being deducted from his gross income. Another deduction to take note of is Escrow. In the beginning of each season, 10% of the player's gross income is held in escrow. Escrow is then given back to the players as long as the owners pay the players an agreed upon percentage of Basketball Related Income. 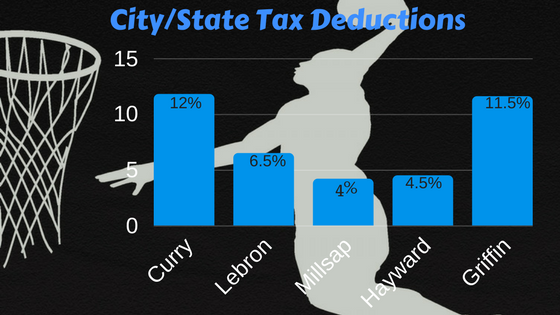 City/State taxes play such a large part in determining the players take home pay. As you can see below, Steph Curry goes from being the 1st highest gross paid player to the 3rd highest net paid player. Curry’s California state taxes are to blame for this decrease in take home pay. Lebron James (Ohio) ends up taking home the highest salary due to his low city/state tax deductions.

Salary and deduction breakdowns for the highest-paid NBA players by ESPN...