Hollywood & Human Resources: What is HR Like on a Movie Set? 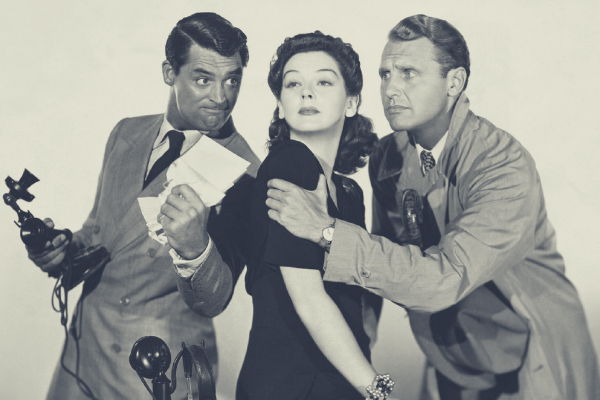 Hollywood doesn’t make very many movies about Human Resources departments, do they? I know, it’s a bummer, right? We’re interesting people! We have interesting stories! Yet when HR departments and reps show up in movies and TV, it usually isn’t a very flattering depiction. We are often the butt of a joke or, even worse, the villains of the the story.

Drew Carey was a goofy HR director who often couldn’t get a date in the Drew Carey Show. In 2009’s  Up In the Air, George Clooney played a traveling “downsizing expert” who helped HR departments decide whose jobs to cut. “The Bobs” have a similar job in 1999’s Office Space, which is a cult comedy. These two bumbling consultants are brought in to help management decide who to fire from Initech, and of course, the main character Peter bewilders and amazes them by being upfront about only doing enough work to avoid getting fired.

This is not to say that those of us in HR can’t take a joke! We can enjoy a joke that pokes fun at us, especially for some of our quirkier habits. Most of us probably have a soft spot for “Toby from HR” on The Office as he tries to keep the Scranton branch of Dunder Mifflin from becoming a hotbed of lawsuits and PR nightmares, but we also get a pretty good laugh out of Michael Scott’s obvious disdain for the guy!

But this got us wondering--what does HR look like in Hollywood? Screenwriters seem to have a pretty negative view of our industry, but what about the rest of Hollywood? What is the role of HR on a movie set or in a production company?

Some HR Industry Standards Are the Same

When it comes to the work of a Human Resources representative, there can be some differences from one industry to the next. However, there are also a lot of things that are consistent no matter what industry you work in. Whether you are responsible for representing employees who are manufacturers, retail workers, executives, or entry-level temps, you are still completing a lot of the same tasks.

Hollywood HR departments are the same.

Whether we work in Hollywood or Hoboken, we recruit workers, hire and onboard new employees, manage payroll and benefits for the company, ensure compliance with all applicable employment and tax laws, manage employee and employer relations, and create performance evaluation processes.

Regardless of industry, HR representatives who have worked in smaller companies are likely to find more in common with small production companies, whereas reps for huge corporations might feel more camaraderie with the HR teams at mega production studios.

Some Things About Hollywood HR Are Unique

So what is unusual? Are there any perks to being an HR worker in the movie industry as opposed to other major American industries? Are there drawbacks?

We are aware of several significant differences that HR workers in Hollywood deal with. Let’s talk about them!

Every state has their own labor laws that govern HR departments. One of the biggest responsibilities of an HR director is ensuring that everything the company does is complaint with all governing laws, including federal, state, and local statutes. California’s labor laws are no joke. In 2018 and 2019, new laws that affect California employers include:

Understanding the intricacies of California employment law is one area where movie companies in Hollywood stand apart from their HR peers in other states.

Not everyone on a movie set (or in a studio) reports to HR, even if they work for the production company.

It is easy to think that everybody on a movie set works for the production company, but that’s not accurate. When you see footage of a busy movie set, not everyone there is an employee of the film company.

Even though the production company hires many people on the film crew, there are also a ton of people on a set who don’t work for the company.  When you watch the credits of a movie, how many other companies do you see? A lot of them! Even if the set is owned by the production company, that does not mean that everyone there is an employee of that company. At the same time, many of a film company’s employees never set foot on the film set.

Hollywood’s movie making industry is more heavily unionized than most other American industries.

HR departments in the film industry must work within the confines of a heavily unionized industry. These are the major guilds and unions that protect workers’ rights and advocate for their members in Hollywood:

A strong HR department will work hand-in-hand with these unions to ensure positive, strong relationships between the company and all employees.

One Other Important Thing…

One major role of a Human Resources department is to protect employees from all forms of discrimination, including sexual harassment and violence. One of the things that Hollywood HR departments are dealing with today is the fallout from accusations of sexual abuse and harassment that has taken place in the industry for decades. The #MeToo movement has brought attention to this problem in Hollywood, and today’s movie industry HR departments have many messes to clean up. Unfortunately, they may have had a hand in causing some of the problems they now have to respond to by not taking complaints seriously or not having rigorous enough protections for their workers.

This reckoning has shaken the HR industry throughout the country. The #MeToo movement, which started in Hollywood but has now shifted to affect numerous industries and fields unrelated to movie-making, should be a reminder to HR departments that sexual harassment and discrimination should be taken seriously from the very start. Training employees to recognize, report, and appropriately respond to sexual harassment accusations can prevent lawsuits, scandals, and public relations crises. More importantly, doing these things makes the workplace safer for everyone.