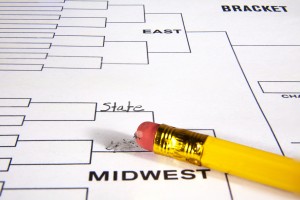 March Madness is upon us! This weekend will prove to be a very exciting one in sports. Did you know it’s estimated that 50 million Americans are participating in March Madness office pools this year?

With such distraction it’s been estimated that during the first week of the tournament this year, companies may lose up to $1.9 billion for every unproductive work hour. This is coming from many different sources including people talking about the tournament, setting up the brackets, filling out the brackets, watching the games via mobile device during the workday, and so forth.

So what’s a manager to do?
Do you risk sabotaging the “fun” environment in order to decrease the amount of unproductivity? Many experts argue “no”. Initiatives to block access and stop March Office Madness could actually result in long-term damage to employee morale, loyalty and engagement. In addition, although the estimates on lost productivity seem staggering, it may not make an impact on a company’s bottom line.

Spin it…
Instead of making basketball a big workplace no-no, embrace it in a way to improve company culture and decrease dollars wasted. Ideas include holding March Madness lunches, where there are designated times that employees can create and discuss their brackets. You can also designate one person to tabulate and keep employees posted on who is winning. You may also want to have a few TVs positioned around the office (with the sound off) to avoid employees streaming at personal computers and mobile devices.

Now it’s your turn.
Do you feel March Madness activities in the workplace, such as watching games or participating in pools that don’t involve money, have a positive or negative impact on employee morale?

Share your thoughts in the comments section below. We’d love to hear what you think.